My rust removal and stripper setup.

1: Small length of threaded rod to act as a hanger
2: 1 used pool chlorine bucket (I felt the 5 gallon bucket was a little small but totally useable)
3: a made up ground harness from left over wire and some folder clips
4: carbon graphite stock
5: Super wash soda
6: a battery charger

I discovered via many searches the Carbon Graphite rods allow for many uses over and over again.
where as any metal used the rust will transfer and stick to ultimatly reducing the electrolysis path way.
if you have plenty of clean metal. then it will work just as good.

** Updated:
this process of electrolysis their are the anode ands the cathode. the cathode is your rusty part.
and the anode? the anode acts like a magnet in a lot of ways.  at first the anode has lots of pull
and a direct line of path. over time the rust gets transferred from the rusty part to the closest section of the anode. And eventually the anode gets coated with rust. thus reducing line of site or efficiency.
if you remove the rust from the anode your good to go again. but hey who wants to remove any rust the hard way? just get a new anode or get an anode that rust wont stick too.

I also discovered that after the solution/mix warms up say between 90-140f it seems most effective.
that being said once it gets above say 140. it then becomes less effective.
my setup has to be ran on my chargers lowest setting other wise it goes into meltdown.

as far as the parts? clean as a whistle thus far all the parts I have stripped also removed the paint.
Im told your mileage will vary.
the wash soda can be had at almost any grocery store.
I put about a cup to the 5 or so gallons.

I tried leaving parts in for a day just to see if too long is in fact too long.
makes abso no difference. just a waste of battery charger time.
once the part is clean it wont get any cleaner.

I don’t know what the ratio Battery charger amperage / time to de rust
time is because I only have the one charger,. But from what I have read a small charger
will have the same effect perhaps taking a little longer.

Best of luck all! 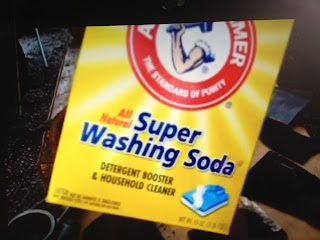 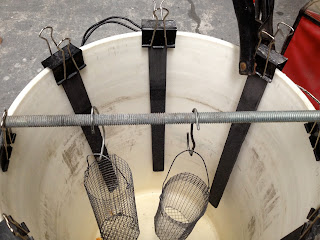 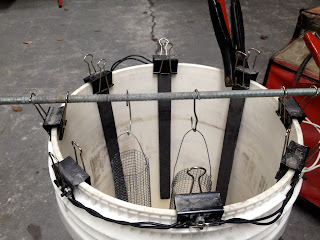 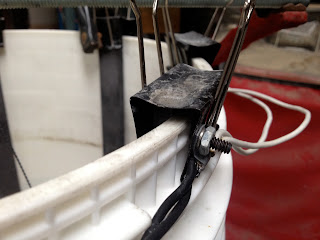 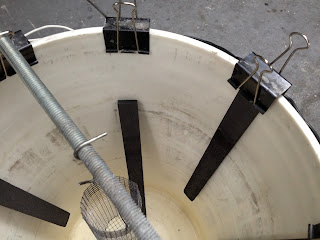 removed one of the graphite stocks so you can see its just held on by the clip. 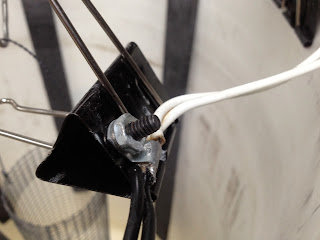 close up of my clips.
Drilled a hole and strapped the wire underneath.